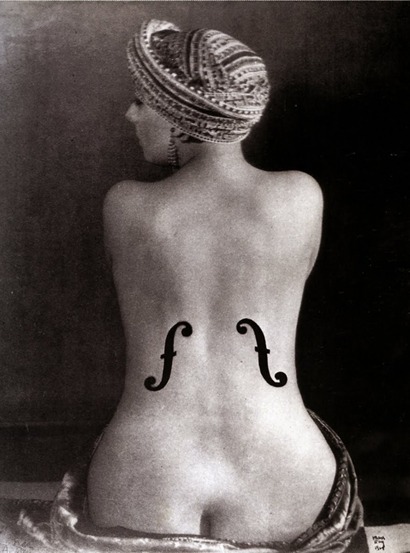 ​In 1907 Man Ray gave up his studies in architecture and took up painting. After marrying in 1913, he moved to Ridgefield, New Jersey, where he tried to found an artists’ community with his friend the poet Alfred Kreymborg. Living in New York in 1915, he had his first exhibition at the Daniel Gallery. He became friends with Marcel Duchamp, and they participated in founding the Society of Independent Artists, Inc. (1916), the review New York Dada (1921) and the Société Anonyme (1929). At around this time, he developed his “aerographs”—abstract paintings executed with an air-brush—and composed a portfolio of ten color pochoirs, Revolving Doors (1916-17, published in 1926). He moved to Paris at the time of his exhibition in December 1921, at Librairie Six, organized by the Paris Dadaists, who launched a rumor that he was a rich American, president of the chewing-gum trust. Man Ray concentrated in photography, and did portraits of nudes inspired by his companion, Kiki de Montparnasse, and created new processes, such as his x-rays of objects, called “rayo-grams,” of which he published two albums, Champs délicieux (1922) and Électricité (1931). The Galerie Surréalistte on Rue Jacques-Callot opened on March 26, 1926 with an exhibition of his works. Man Ray also made several films, including Emak Bakia (1927), L’Étoile de Mer (1928) and Le Mystère du château de Dé (1929). André Breton wrote the preface to his collection of etchings, Ballade des Dames hors du temps (1934), and Paul Éluard “illustrated” his series of fifty-four drawings, Les Mains Libres (1937) with his poems. From 1940 to 1950 Man Ray lived in the United States, where he worked on such paintings as Promenade (1941, Yale University Art Gallery, New Haven) and published a book of drawings, Alphabet for Adults (1948). When he returned to Paris, he made another series of paintings titled Équations shakespeariennes (1948-50), and made fanciful objects called “alarming presents,” including Le Pain peint (1960)—a fake loaf of bread tinted blue. Considered one of the greatest photographers in the world, Man Ray was also the least conformist of painters, claiming, “If I had to choose between originality and depth, I would certainly choose originality.”